Today I am thinking of the Kiwi artist Graham Percy (1938-2008) who I first stumbled upon in Wellington’s City Gallery museum. On that particular day, I was wandering around the museum, and could see that a new exhibit was about to go in. I saw a few pieces outside of the gated main room, and they were enough to get me hooked. Loitering in front of the gate like an arty creeper, I peered around it from various angles, crouching, and craning my neck, trying to get a better view inside. I went back the next day, when The Imaginative Life and Times exhibit opened for real.

Then I really fell in love. 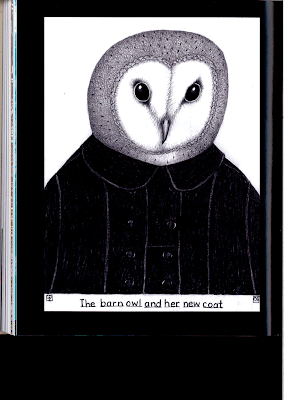 His art and illustrations are the embodiment of creative whimsy, of imagination, wit, humor, and wonder. All qualities I continually strive for. Looking through my New Zealand journal the other day, I found a quote from the exhibit, written in red ink and an enthusiastic script:

“Percy’s approach remained very much that of a wonder-struck child, whom the educationalist Fredrich Froebel once characterized as the archetypal “micronaut”–an explorer of the small things, the textures and borders of the everyday and the immediate.”

I would consider my life well lived indeed, if this was in part how I was described at the end of it.

His titles are half of the fun. The following match the above illustrations, clockwise, starting at the top right:

– Franz Schubert emerges from a stream near to Crear with a trout he has caught. This, along with the five watching rabbits, has given him the idea for a quintet. (1891).

– Dvorak, Dohnanyi and Schumann discuss a concert of their works with local residents at Crear.

– Within a Rachel Whiteread installation Felix Mendelssohn-Bartholdy is reminded of Fingal’s Cave.

This entry was posted in Uncategorized and tagged art, like, random. Bookmark the permalink.