Another perfectly sunny weekend in Portland.
One wonders if the even the rainclouds like weekends off. 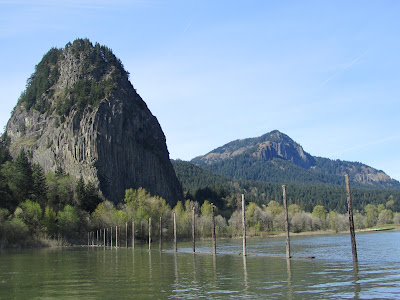 So, Beacon Rock State Park. Tremendous spot to spend an afternoon with friends.
Home of osprey, turkey vulture, flicker, and cormorant. Heady with the sweet smell of sticky cottonwood buds. Named for that big, bad 848-foot slab of  volcanic rock on the banks of the Columbia. Apparently this gargantuan andesite plug is one of the largest free standing monoliths in the northern hemisphere. In our own backyard! When the intrepid William and Meriwether hit this point in their western journey, they measured the river tides and marked the rock as the eastern extent of tidal influence on the river, indicating their trip was nearly complete. I’m guessing there was a solid round of high-fives, or at least firm back-slapping, and a general smoke ’em if you got ’em attitude, assuming they were likely long out of whiskey, but yet undaunted.
.
In 1915 a dude named Henry Biddle bought the rock for a whopping one dollar, which must have been a pretty damn good deal by anyone’s standards. Now there are all sorts of crazy metal railings, monkey bars, and switchbacks snaking up to the sweet view from the top.

Down at the riverbank, out on a fishing dock we saw a sea lion. A sea lion! Not, as we prematurely speculated, a small whale. Or an antlerless elk. Or the King of all Beavers. Or a wayward capybara. Or Nessie’s cousin. Sea lions come in from the coast and hang out around the Bonneville Dam, gorging on migrating steelhead and salmon. In doing so they piss off a lot of people. Washington State now regulates (as in monitors, relocates, or eliminates) these big pinnipeds. Its what we call an unfortunate situation. On a side note, sea lions have been trained by the U.S. Navy for secret underwater military ops. And they aren’t the only animals.

But, enough about big rocks and animal spies. This day was mostly just about laying in the sun, running in the green grass, getting sunburned, getting happy about it, and propelling various sporting apparatuses to and fro.

I hadn’t kicked a soccer ball around for ages. While my heart was totally in it, my legs took a bit of a beating. Lack of appropriate footwear combined with a series of skewed connections between leg and ball (as power knee pops kept drifting into thigh-crushing catapults), has left me with a skull-sized bone bruise and the feeling of being acutely pummeled by a sack of air-filled leather. But it was absolutely worth it. Actually, it was pretty delicious.

This entry was posted in Uncategorized and tagged northwest, travel. Bookmark the permalink.