Smokey and the Bandits 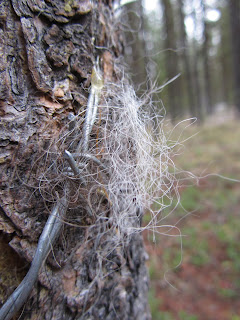 This summer I embark on my third year working on the Northern Divide Grizzly Bear Project  in Glacier National Park, aka The Greatest Job in the World. The project has been ongoing, in one incarnation or another, since 1998. It started out in Glacier, but now encompasses nearly eight million acres around the Northern Continental Divide Ecosystem. Our current objectives are to: 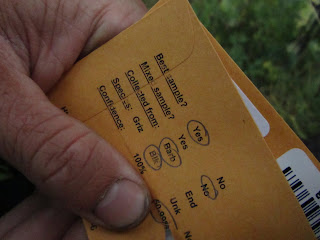 Noninvasive sampling methods involve collecting data in such a way as to not annoy, molest, stress, or piss off the wildlife in question. This could mean observing behavior from a distance, studying tracks, collecting shit, or nabbing hair in the woods. Nerdy lab-rats can extract DNA from hair follicles and tell us who is who in the bear world, down to the individual level. And so we are professional fur burglers. For reasons that are still unclear, bears love to rub their backs on trees, power poles, fence posts, wooden bridges, etc. I get it. It probably feels pretty damn good, and I bet it isn’t easy to book a massage when you are a 500 pound grizzly bear. In previous seasons we identified trees that bears had already enjoyed rubbing on, and we numbered them and added four foot-long strands of barbed wire to the trunks. Now we can walk through millions of acres of habitat from Glacier to Missoula, and check thousands of trees for bear hair. We will do this all summer, hitting each tree three times, no matter the weather, no matter the state of our creaky knees, blistered heels, wet feet, or bruise collections. And, by and large, we will be grinning and grateful, even while grimacing, to be out in the hills, quietly following North America’s biggest and baddest carnivore.

The crew completed a week of training a couple of days ago.
Collective highlights/items of note included:

– Snowfield and creek-crossing training in the cold, cold rain.
– Infamous the-woods-will-break-you-if-you-aren’t-careful cautionary slide show of woe.
– One black bear and two grizzly sightings.
– Graham diving over a six-foot campfire and being caught by the crowd.
– Rotten fish grinding.
– Unknowable quantities of PBR and whiskey consumed.
– Salad with every meal.
– Rain every day.
– Sunset on Lake McDonald.
– Late night mission to make growly bear noises around the new interns’ tents.
– Hair samples!
– And, because I was there, a mini-MJ dance party at the bar, just to wrap it all up.

Looking forward to an exceptional season.

This entry was posted in Uncategorized and tagged bears, glacier, science, work. Bookmark the permalink.