Posted on January 24, 2012 | 2 Comments
I’ve spent many years researching various charismatic megafuana… the kind of characters the Sierra Club slaps on thousands of those return-address labels no one specifically asks for… big cats, wolves, grizzlies… I’ve also spent several seasons slogging around ponds catching frogs and toads in the daylight and in the dark, and counting tadpoles.
This winter I am mixing it up. Keepin’ it real. I’m doing some invertebrate taxonomy contract work for the USGS aquatics project here in Glacier. This basically amounts to sorting through a small mountain of summer stream samples under a fancy-schmancy Leica microscope, and picking out all the tiny, tiny bugs. And oh, what bugs! We’re doing this to get baseline data on the community of alpine insects in high-elevation, glacier-fed streams, and to learn more about the life histories of some of the more rare species, including a type of sexy stonefly (Lednia tumana) that has been petitioned for endangered species status. Though it is decidedly less glamorous than a wet-nosed polar bear cub tickling itself, this stonefly is imperiled by the acceleration of melting glaciers, and is thus another would-be casualty of climate change. 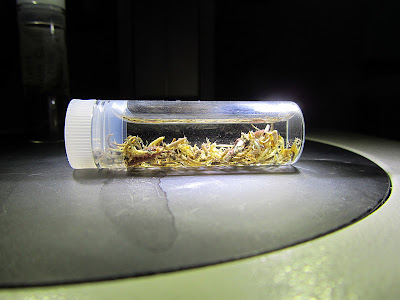 It has been a very long time since I’ve spent any time around a microscope, and I am learning that there are certain given truths a lab jockey must accept: (1) your back will hurt constantly, (2) your eyes get totally wonky, (3) you get to listen to an endless stream of books-on-tape (Pollan, Gaiman, Franzen, and Eugenides last week), and (4) you will need a constant supply of warm beverages within reach at all times.

Oh, and (5) you will absolutely and literally see bugs when you close your eyes. This is about as creepy and annoying as it sounds. And they aren’t butterflies and ladybugs you know… no, they are mushy, gray flatworms and thin, tangled nematodes. They are the ghostly white larvae of various caddisflies and the other flies: stone, damsel, alder, may, crane, and dragon. The perfectly-round-bodied water mites, their speckled yellow backs covering the curl of eight spindly legs. And so many midges. Mostly midges, each curved like a pudgy clipped fingernail. My favorite find so far has been these little bowling pin-shaped deals, punctuated by a head crowned with two frilled antennae that look like ridiculous party earmuffs. Whenever I found one of those I’d imagine it speaking in a British accent. Maybe like that bizarre scarf-wearing worm in the movie Labyrinth. G’ day, govna! I was a little bummed to learn that my dandy friends were actually black fly larvae. They aren’t exactly the easiest creature to love, but I am trying. But then most baby animals are more charming than their parents… and really, you should see these frilly deely boppers. It did remind me of learning years ago that who we were endearingly calling Fuzzy Willis for weeks was in fact mosquito larva, writhing in mass. It was kind of impossible to feel affection for those little guys after that realization. You’ve got to draw the line somewhere.

So I spend several hours a day going through just a few ounces of water and vegetation and muck, picking out the bugs with a pair of sharp silver tweezers, which by now feel like cold and nimble extensions of my own hands, to the point where I can actually feel the pressure of grasping a nearly microscopic creature between my “fingers”. It is a truly crazy feeling. At the end of the day, all those bugs, hundreds even, fit into a small vial of alcohol, like some etymologist’s crack stash.


But the best thing about this work is that it allows you to peak into a totally different world. There is a magical little alternate reality in these tiny universes. Dragons and basilisks lurk behind branch and bush, reed and rush. Sea monsters lurk. Aliens burst forth from chest cavities. Crazy shit goes down. It never ceases to amaze me how much of the world we cannot see with unaided eyes. It’s incredible. In a lot of ways, we have no clue what the hell is going on. I love that. I love wearing the emerald glasses for a while. I’m ready to be surprised. I’m ready to be dazzled. See you in Oz.

This entry was posted in Uncategorized and tagged animals, glacier, nature, science, work. Bookmark the permalink.

2 responses to “Mothra vs. Sea Monster”