The Fish With Stars On Its Back

Tomorrow I am lucky enough to be heading to Belize, that little Central American country known for its extensive coral reefs, Mayan ruins, jaguar preserve, tourism industry, and shark viewing. And while I fully intend to swim, snorkel, tan, look for spotted kittens to snorgle, and drink copious amounts of fruity rum concoctions while languidly lounging in shady hammocks… there is one thing I am hoping, above all else, to see: a whale shark. 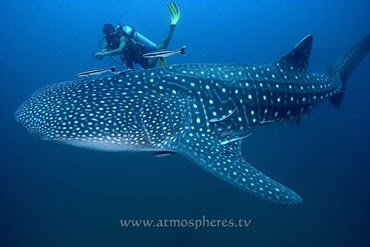 The Fish with Stars on Its Back. The largest living fish in the world, family unto itself, up to forty feet long and over 21 tons. A filter-feeder, living mostly on plankton collected in a capacious sweep of a mouth (yes, over four feet across and big enough for a person to slip in, should anyone get so distracted), it is a shark, but is as giant and gentle as a whale. I have always been fascinated by these creatures–imagine! a map of the universe on your back!–and it so happens they begin to frequent Belizian waters this time of year. Like anything so star-spangled, they are most active at night, especially just before and after a full moon. Their star-spots and stripes are individually unique, and in a poetic twist of science, biologists can identify individuals by using the same star-mapping algorithms NASA employs in its Hubble Space Telescope technology. Strangely fitting, I think, to see the cosmos reflected back into our oceans, stars glowing, burned onto the backs of leviathans, as old as grandmothers.

I know I should not get my hopes up. I know March is just the beginning of their migrational maraudings here, and it may be a long shot. I know tours can be expensive and offer no guarantee. But still. In my dreams, I slip into warm, womb-water tides. I follow the moon. I am frightened, but I am brave. I swim out, but not too far, until constellations shine above and below, until I am cradled in a briny glow. And, because they are dreams, I float, flat as a leaf in the between, until one rises up beneath me, and I am suddenly stretched long across Orion, and our backs glow in the moonlight, fiercely.