It will be hard to relate the gravity of this, one of the most meaningful moments of my life, to you in words. Letters, sounds, colors alone are not enough. To speak in concepts, perhaps. Purity. Perfect happiness. Beauty. Bliss. Gift. But to truly feel it, I think one must be cradled in that warm, briny womb-water of the ocean, wrapped in that filtered, saturated blue light. 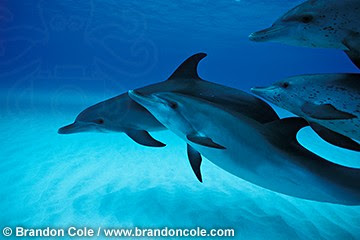 Just as we were back on the boat, motoring away from a day of snorkeling around that tiny slip of island, Ranguana Caye, trying to get situated in a wave-sturdy seat, I heard the commotion. Guides and captain yelling back and forth in Belizean Kriol, the rest of us clueless as to what was going on. Then extended arms, pointing fingers. Then dolphins, diving through the waves alongside the boat. A pod of pantropical spotted dolphins, Stenella attentuata, name like a poem. Obviously it took me all of a second to realize what was happening and throw myself against the side of the boat, leaning over it like rabbit-crazed dog eager to jump out of a moving vehicle. Our guide Luis said something about swimming with them, and something about waivers. None of us could tell if he was kidding, until the boat banked and circled around twice more, staying with the pod. When he said masks and fins, I fell upon by bag with the speed and voracity of a starving beast. My fins only half on I began stumbling and lurching toward the end of the boat, nearly tripping over myself as I tried to secure the mask and snorkel while heeling around in twenty-inch shoes. Luis stopped me near the edge, said my hair was all caught up in the mask breaking the seal. (Incidentally my hair, known now as “the beast”, attained new and unrealized levels of big in this preferred, tropical habitat.) But the words swim, with, and dolphins had all just been uttered consecutively, and my brain was already mush. I just stood there like a little kid, fidgeting while he tucked my hair away, chuckling.
Vin’s account of the scene is as follows:
While the rest of us got hung up sorting out the veracity of Luis’s offer, Katie was already fishing out her flippers and gear from the bags under our seat.  As the boat got busy trying to chase the dolphins down again there was suddenly lots of commotion on the deck and shouting between the captain and crew.  I realized they were actually going to let us do it. At that point, Katie was already perched on the edge of the boat trying to force her mask down over her mass of curls. Luis stopped her and said, “Wait, I have to do that for you”.  I think he just wanted to touch her hair. She launched herself right in without thinking as soon as the mask slid over the beast.
I was in the water. I was all purpose, swimming as fast as I could toward where I last saw the pod. Then suddenly, there they were, beneath and beside me, chattering in their squeaky foreign language. Maybe eight to ten, with at least one baby stuck to her mother’s side. I tried to count, but by then my brain was short circuiting, bursting only with the thoughts dolphin. swim. must. get. closer. They’d fin out of view, then circle back. Such generous creatures, so curious and friendly. At times I was just a few feet away. Once or twice I reached my hand out, not to touch, per se, not to disrespect, but just to be that much closer to them. Because close as I was, it was almost a small heartbreak amidst such pure, innocent joy, to be separated. To be separate. How I wanted to keep pace. How I wanted to belong to that world, to be one of them, just for a moment, all flippers and fins. All speed and grace and goodness.
I didn’t know where the boat was, where the other eight or so snorkelers were. I didn’t care. Had I the strength, I would have followed the pod until sunset. When they finally swam off, with purpose, out of sight, I looked up and found I was off on my own, the farthest from the boat. Others were already climbing up the squat ladder, already back on the deck. I heard someone say Shark while scurrying up. We never knew if that was a joke or a sighting. It didn’t matter. The rest of the day was a sort of haze for me, as I tried to slow down time enough to reflect on it all.
For days after I’d turn to Vin and ask “remember the dolphins?” A sort of good-natured joke. Eventually though, at times this would come out as more of a statement than a question. Remember the dolphins. Remember that feeling. Hold on to it, hold on with both hands.