This is about five months overdue, but ah, we went and had a baby, so I figure I’ve got a decent excuse.

Originally I wanted to write about my birth experience, but I could never quite find the words for such a shared, but deeply personal event. In short, it went down in about the exact opposite way of what I was envisioning, took a hell of a long time, hurt quite a lot, was utterly and previously unimaginably exhausting, and ended in stitches. And one well-lunged nine pound baby.

In all my years of backpacking I used to equate climbing a difficult mountain with childbirth. You know, it may be tough getting there, but all that pain vanished in the breeze with a view from the top… blah blah blah.

Ha! I was so, so foolish. Though granted, I’ve never tried climbing a mountain for 30 hours straight while shaking uncontrollably and getting pummeled in the guts every minute, eating very little, and then at the height of my thirst been offered only lukewarm dribblings squeezed from washcloth onto my sad, cracked lips. No, no I haven’t. Perhaps if I had, I’d have been better prepared.

But. . . despite the intensity of it all, the part of mostly just remembering the good stuff has proven to be true, and now I mostly think of the whole deal fondly. Having not watched a loved one take on a mountain quite like that, I’m not sure Vin and my mom feel the same way about the experience, but hey, we’re all fine now.

What I do remember lives in fragments: Peeing in the bathtub. The intermittent compression and release of the sphygmomanometer on my bicep all night. Half-watching jellyfish blooms and baby seals and giant anteaters parade across the screen of a small tv in the corner as Sir David Attenborough provided commentary and I tried and failed to sleep.

Then pushing. Forever. Then being strapped to a table, arms splayed as if in crucifixion, and wheeled into a blinding room. Then fear. Then the wail of a baby, and just. . . whoa.

Atticus Beren D’Angelo looked like an old man with tremendous feet when we first saw him. He was named for two great literary heroes — total badasses, really — though truth be told, his middle name was almost Otter. 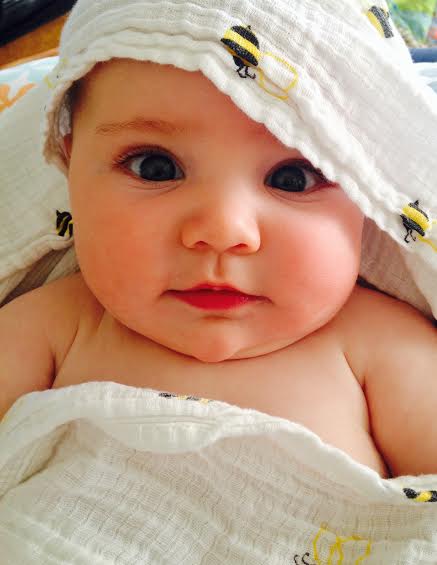 He spent his first four months of life sleeping between a grizzly bear and a wolf. I mean that literally — not as some cheesy spiritual visualization of his parents. He slept in the shadow of two incredible spirit robes, which hopefully bestowed upon him a lifetime of wild and woodsy mojo.

When he’s feeling particularly delighted, or a bit nervous or shy, or perhaps all those things at once, he brings his left index finger to his mouth. And if the gag is really good, he might put the whole little loose fist in, the charming baby equivalent of knuckle-biting, I suppose.

His fat Irish cheeks get pink and rosy with emotion and temperature. He has at least five different laughs, and as many cries. He’s got a huge toothless grin and big, clear blue eyes, though we’re not sure what blue yet… kestrel-shoulder blue, or thunderstorm blue, or summer Delphinium blue, or dusky  evening blue, or perhaps even hazely ocean blue.

His head is ginormous, and when he stands steady but with assistance, his body proportions never cease to crack me up. . . all head and torso. His nicknames are varied and tend to reflect this physique — good-natured to be sure, but probably best changed before he actually understands the English language, for they include, privately, Fatty Lumpkin, Milk Jacket, Chubtart, and Goldbricker, though to others he is simply BabyBoy or Mr. B.

He loves to be outside and to look at trees swaying in the wind, and to dance in my arms. He laughs at the dog.  He poops a lot. He has a voracious appetite. He already has a litany of ridiculous songs dedicated to commemorating all of these things. His favorite thing is when you pretend to eat his hands, feet, or soft underbelly.

So yeah, that mountain. . . totally worth it.