Check out my latest review for Orion magazine, and then check out the book! 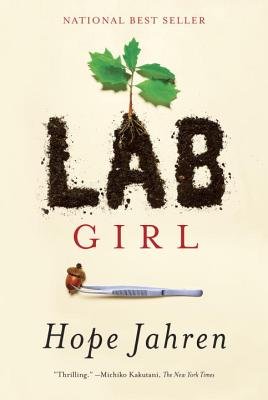 “People are like plants: they grow toward the light. I chose science because science gave me what I needed — a home as defined in the most literal sense: a safe place to be,” writes geobiologist Hope Jahren, in Lab Girl, her luminous debut memoir.

Raised in a stoic, midwestern household where “the vast emotional distances between the individual members . . . [were] forged early and reinforced daily,” Jahren grew up living a bit of a double life. By day she helped her mother in the garden and did traditional “girl things,” but at night she’d follow her father to his teaching lab at the local community college and find her true sanctuary. Roaming after hours, rifling through drawers, contemplating equipment, and experimenting with pH strips and slide rulers, Jahren felt like a superhero in the lab, shedding her daywear as she transformed “from a girl into a scientist.” In spite of a complete lack of female scientist role models, her desire — even need — to become one herself was built upon this bone-deep instinct she doggedly pursued for decades.

Today, with a bevy of prestigious awards, professorships, and a long list of scientific publications written in a rare “language that very few people can read and that no one ever speaks,” Jahren is prolific in her field. But it turns out that she has impressive conversational chops, too. Peppered with literary references to Ganet, Beckett, Dickens, and Thoreau, Jahren’s honest prose is insightful, eloquent, and funny, and she has a gift for explaining hard science in the most bewitching way.

As chapters alternate between the personal and ecological, we learn how willows clone themselves, how trees remember their past, how seeds incubate, and why cacti form spines. But we also see how these natural phenomena parallel Jahren’s own journey. A passage on the tenacity of a vine that “becomes whatever it needs to be and does whatever it must in order to make real its fabulous pretensions” is cleverly paired with a frustrating but fascinating account of the never-ending battle to secure funding for science. It’s a common struggle in a country that “may say it values science, but sure as hell doesn’t want to pay for it.”

But the real heart of the book is the story of her touching relationship with Bill, her brilliant, disaffected lab partner. Fiercely loyal to each other, Bill and Jahren are kindred spirits, fraternal twins born of different mothers, matched in their insatiable curiosity, monster work ethic, and eccentricity. Together they build and move three different labs, often living below the poverty line in lean times, and in Bill ’s case, actually living in the lab.

Lab Girl is a book about being a woman in science as much as it is a clarion call to follow your passion. But in the end, it’s easy to see the book as a love note — not just to plants, to science, and to the sweetness of discovery, but also to friendship and loyalty, to journeys big and small, to belonging and becoming.

This entry was posted in Uncategorized and tagged badassery, book review, recommendation. Bookmark the permalink.