The other day I was driving down along Columbia River with my friend, Tim. We’d just finished a sweet and windy hike up and back from Dog Mountain, and we were talking about the River. We were imagining what this part of the river must have been like before the dams went in, back when the water was a wild and braided tangle of swirling tributaries, festooned with islands, thick with trees, decorated by the great stick nests of ospreys. Back when falls and fish dominated this river, and tribes camped near it, hauling out great and heavy catches of shimmering protein, and settlers and explorers both feared its wildness, and, let’s face it, were probably pretty annoyed when scheming ways to cross it. For all its beauty and bounty, I’m guessing this river was kind of a pain in the ass.

Starting in British Columbia and running nearly 1,250 miles before hitting the Pacific, the Columbia is the biggest river in the Pacific northwest, and the the fourth-biggest by water-volume in the country. Its fourteen hydroelectric dams produce more hydropower than any other American river. Back in the early 1940s the federal Bonneville Power Administation hired a young Woodie Guthrie to write a series of songs advocating for the damming of the river in hopes of winning over public opinion with catchy chords and thoughtful lyrics (“your power is turning our darkness to dawn..”). Orion published a great article by Matt Rasmussen about this very, seemingly ironic (Woodie being a giant hippie and all) thing. If you haven’t heard and want to get edumacated, listen to Roll On Columbia, Roll On here.

Anyway, on that day, straddling Oregon and Washington, we happened to be right by the Bonneville Dam. I’d already been thinking about the Bonneville Dam, not because I’m a hydrogeek or think about dams often, but because of the fish hatchery there. And more specifically, because of a particular fish who lives there. Herman.

Herman is a white sturgeon. I realize if you’re not Ichthy-minded that isn’t much of a descriptor. I could say Herman is a bluegill, or a cutthroat, or a clownfish, and you may or may not conjure up an approximate mugshot. For one thing, Herman is not at all white. He is gray. But lots of things are gray. And grey. Some more helpful terms and adjectives that might improve an Introduction to Herman would be: Big. Really, really big. Monstrous. Ancient. Armored. Alien. Sharky. Not unlike a battleship. Primitive. Mustachioed. Trash-compactor. Beastly. Seriously, huge. Badass. And, to quote a writer friend Brian Doyle, the Oh My Fucking God Fish. (Brian has an essay about these fish forthcoming in Orion, so keep your eye out.)

And here, if those don’t help, just check him out for yourself:

Herman is about eleven feet long and weighs in at about 600 pounds. No one is exactly sure how old he is, and I bet he likes it that way.

White sturgeon are a primitive and mysterious fish. They hang out at the river bottom, shlooping up foodstuffs from the muck with their big mushy, toothless mouths. The biggest can reach twenty feet in length, and weigh over 1,500 pounds. They don’t have scales, and their gray armored skin looks tough enough to make into a pair of boots. Smelly boots. They are a late-maturing species, and females don’t start to spawn until they are in their twenties, at which point they may release a few million eggs at a time. Damn. 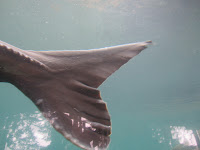 Suffice to say, it was pretty awe-inspiring to stand at eye-level with these ancient krakens. And to think of how many more are barging it along the river bottom, along with god knows what other crazy things, at this very moment. A few years ago a writhing, swirling ball of nearly 60,000 of these guys rolled right into the base of the dam. They don’t know why that live wrecking ball of fish was bowling down the river, but they think the hitting the dam part it was accidental.
Or at least they hope it was…

This entry was posted in Uncategorized and tagged animals, northwest. Bookmark the permalink.

2 responses to “What Lies Beneath”