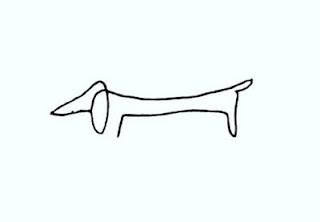 So the other night I got a message from my friend and roommate, Dan, that he was coming home from pool league with a surprise. Immediately I asked if it was a puppy. Or a trophy. Or a puppy-shaped trophy. These are my standard responses when the word “present” or “surprise” is uttered. Sure enough, about midnight he walks through the door with a dog. Well, a mostly-dog. Apparently he’d seen the black and tan mini-dachshund run across the highway and zip right into a bar called The Stonefly (this is Montana) while he held open the door. This was not the first time this has happened, this week, at this particular bar. (Yeah, um, Montana.) Anyway, long story short, Dan brought him home, bathed and fed him, and he’s been here for the last few days, clicking around the house. *Interesting side note about dachshunds–originally bred short-legged to dig out unsuspecting badgers with their mole-ish paddle paws (the mini versions tend to go after rats and prairie dogs)–the famous German breed was referred to as “liberty hounds” by allied forces during World War I, much as delicious sauerkraut was dubbed the wholly unappetizing “liberty cabbage”. I find this fact amusing, ridiculous, and kind of awesome all at once. But, as usual, I digress.

What makes this specific dog interesting are his teeth. His epic, tusk-like snaggleteeth. At first I thought maybe some sadistic person had glued on reverse vampire canines to complete a sick Vampuppy costume, and maybe the adhesive just hadn’t worn off yet. Then I thought perhaps he’d been bitten by a crusty old mosquito, recently defrosted from the Pleistocene, and some ancient saber-tooth tiger blood had mingled with his own, resulting in unchecked, mutant tusk-like dental growth. You’ve seen water deer? Wild boars? Then you’ve got the idea. Fortunately he retained none of the ferocity associated with these other orthadontically-challenged beasts. Actually, he was kind of a shy and nervous sweetie-pie. With the most unholy, record-breaking dragonbreath you’ve even encountered. Seriously, I’ve dealt with a lot of unsavory dead and rotting things in my time, and it smelled like they were all having a party in little dude’s mouth.

It is strange to cohabitate with a dog whose name you do not know. We tried guessing at his… Dr. Fang? Mr. McTuskers? Sir Snaggle? Herr von Weinerschnitzle?… none of these elicited the slightest response. Maybe he wasn’t so formal. We tried again… Hal A. Tosis? Arnold Datuskanegger? Fritzy? Hey Guy? Nothing.

He went to the animal shelter today. We couldn’t keep him here. They said he’d get adopted right away–there being a shortage of small breeds with big teeth in this state and all. I will miss the little guy. It is a funny and wondrous thing, how animals and people flit in and out of our lives. I can remember all of the strays I’ve fostered over the years, their pasts and futures unknown to me, they remain frozen in time. Whether reunited with loving families or adopted by new ones, I’ve rooted for them all. And, sucker that I am, I’ve come to accept that some day when I have a home of my own, I’ll probably end up with a mangy pack of tusked and toothless weirdos. Perhaps Herr Snaggle will be among them.

This entry was posted in Uncategorized and tagged animals, montana, random. Bookmark the permalink.

One response to “The Mayor of Tuskaloosa”