The Most Famous Deer of All

‘Tis the holiday season, and whether or not you celebrate Christmas specifically, no doubt you have been bombarded with Christmas music since Thanksgiving. I dabble in said holiday fare, but don’t indulge so much as to ban any non-seasonal tunes, like some folks I know. And by know I mean am related to. Anyway, I was listening to the radio the other day and of course Rudolph came on, because it had been 45 minutes, and I was struck, once again, by how mean the other reindeer were. Total bitches! Even his own parents try to hide who he really is! And when Rudy finally rises to red-beaked glory and saves the day, there is never really any just recompense from those haters.

Typical. My (indirect) point is, I’ve been thinking about reindeer, and not just the bitchy kind. I figure you good people think about reindeer too, sometimes. But how much do you know about them? In the spirit of giving, I give you . . . 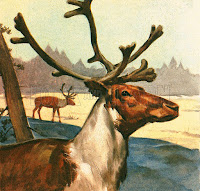 Caribou have the second biggest (but definitely most crazy) antlers of any Cervid, behind the moose. They are the only Cervid species that practices equal growth rights: both males and females grow antlers. Interestingly enough, older males drop their antlers in the early winter, young males lose theirs in early spring, and  females keep theirs until the summer. So all of Santa’s reindeer must be ladies then, no? Not at all surprisingly, their ground up antler powder is a big hit in the aphrodisiac-centered, horned up Asian market.

3. Glow-in-the-Dark Pee?
Okay, not exactly, but it is thought that caribou are the only mammalian species that can see ultraviolet light. This megavision helps the animals to pick out useful things that might otherwise blend in with the monochrome tundra landscape. Things like urine.

4. Big Nose, Fancy Toes
Their huge, smoochable schnozes are equipped with cavernous nostrils that help to warm inhaled air before it enters their lungs. In the winter their normally spongy foot pads harden and shrivel up, exposing the sharp edges of their hooves. This helps with traction on ice, and provides a handy shovel for digging out snow in hopes of grazing. I also tend to shrivel up in the winter, although I have yet to notice a positive correlation on my traction or eating habits.

5. Walkathon
Some North American herds migrate the furthest distances of any terrestrial mammal. They can travel over 3000 miles in a season. Total badasses.

6. Good Eatin’
Reindeer eat a lot of lichen. Reindeer lichen, specifically. They’ll also tear into some mushrooms, and rumor has it, the occasional lemming. But I don’t know about that. Northerly humans love to nom on reindeer, and the animal (both wild and semi-domesticated) has been a seminal human food source for centuries. Most recently in canned meatball form. I am sure Sarah Palin loves them.

7. Where in the World?
Caribou range pretty much all over the Holarctic zone, across tundra and boreal forest habitats. Once abundant, their numbers are in decline due to habitat degradation and the biggest bummer-trump of all, climate change. Read more about hard times in reindeer land in Gretel Erhlich’s fine National Geographic piece on Russia’s reindeer herders.

8. I Vant Your Blood
Apparently colonial Frenchies used to mix the blood of caribou with a little hard booze and drink it down to fight off the cold. And perhaps anemia. The modern incarnation of this Caribooze substitutes red wine for blood and adds a bit of sugar or maple syrup to the existing whiskey. Naturally the Quebecois love this sort of abomination.

9. The Elite Eight
Fact: The names “Donner” and “Blitzen” are derived from Germanic words meaning Thunder and Lightening, which makes a strange kind of sense, but leaves Vixen and Cupid as the most questionably-named dudes on the crew, and possibly in reindeer history.

10. Born Free
There are lots of free-ranging, wild herds of reindeer in the world. So too are there semi-domesticated herds. Arctic and Semi-Arctic peoples have been shuffling these fuzzies around for centuries, using their hides, meat, antlers, and even milk, though such animals weren’t really considered to be domesticated, and they weren’t bred in captivity. Its more like they were partially tamed. Today some nomadic herders track their herds using satellite telemetry. Maybe that is how Santa keeps tabs on his during the off-season… 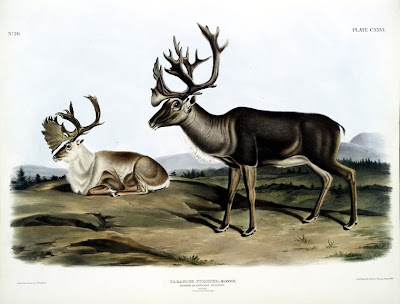 This entry was posted in Uncategorized and tagged animals, random, Trivia. Bookmark the permalink.