Seriously, you’re not going to feel uplifted, or probably have too much sympathy for many of the characters, but the woman sure knows how to write both modern western ennui, and some damn beautiful sentences. 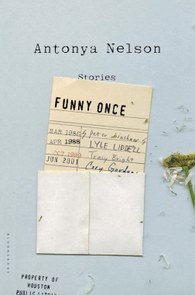 In Funny Once, her distinctive fifth collection of short stories, Antonya Nelson shares a bleak and lonely view of today’s suburban West, populated by characters who face a sort of “terminal unhappiness.” From Houston to Wichita, Albuquerque to Telluride, we encounter desperately bored people behaving badly. They cheat and are cheated on, they self-medicate, they lie at their AA meetings and then slip around the corner for a beer, they stare through windows contemplating the emptiness of their middle-aged lives with a devastating yet oddly refreshing clarity.

In one story, three adult children finally haul their obstinate father to a nursing home, literally duct-taping the old man to his easy chair and loading him into the back of a pickup. “Could anyone ever predict this was where we’d end up?” they ask themselves. In another story, Phoebe, a dedicated pessimist, is galled by her husband’s idealism, the way he fails to see how “life was so little like a science experiment and so much like a cluttered drawer where you tossed things just to get them out of sight.”

The danger of depicting so many miserable, reckless misanthropes in a single book is that some of the characters start to blend together, seeming interchangeable in their lifestyles and attitudes. Nelson writes with a graceful, powerful ease, though, and while her stories brim with the experience of boredom, they are certainly never boring in themselves.

In “Literally,” one of the book’s most memorable stories, a widower struggles to protect both his own young son and the son of his loyal Latina housekeeper from the harshness of life. Of course, trouble ensues — the boys disappear on a secret mission one afternoon, restraining orders are broken, a precious phone containing all his late wife’s last messages is lost. In the end, safely back home, young Danny sums up not just his own experience, but the theme of Nelson’s entire collection perfectly in one line: “This has been a terrible day. … Even though nothing exactly bad happened.”

This entry was posted in Uncategorized and tagged book review, writing. Bookmark the permalink.